September 16, 2010
We wanted to take the ferry from Seward to Valdez, but ending up driving the route for two reasons: first, the ferry only runs a couple times a week, and the schedule didn't really dovetail with our itinerary (and we couldn't twist it), and b; it would cost us about $500. Hello?
So, we made the drive, which was pleasant enough (that translates into half rain, half sun - of course with a few other stops), and found a beautiful campground on one of the mountain ranges ringing the city - Blueberry Lake.
We drove down into Valdez, and found what seemed like a slightly depressed town. I only say that because for a city of 4,000 with a great fishing trade and where the pipeline ends, there isn't a whole lot to see outside of the main street and the "other" street facing the docks. 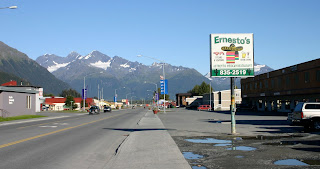 Above: the docks facing the mountains 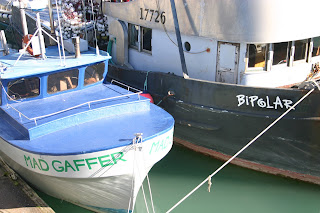 These are salmon crowding the water's edge near the boats....
(I assume they have spawned and might be dying). 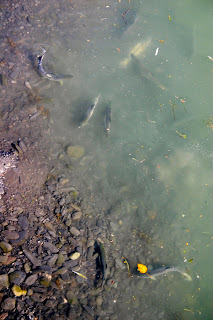 Haines is a much smaller town (about a quarter of the population of Valdez) and depends on much of the same work (fishing, shipping, important historical sites) - and is in much the same state as Valdez. We decided that we absolutely had to have a salmon dinner before leaving Alaska, and got pointed in the direction of The Lighthouse, at dock's edge. It was a most forgettable meal - over-priced, poorly prepared (I've had better fish in some of the most out of the way, small, land-locked places). Except for the bartender Tim and the bar (which dates to late 19th century), you're better off eating somewhere else - or cooking your own meal. 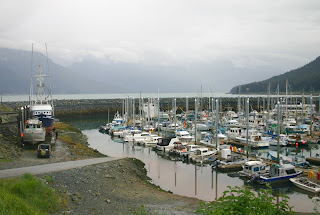 It is a wonderful little city, and while we weren't able to spy any bears 11 miles south, where they come down most days to fish in the river, it is absolutely beautiful.