Time for a change of scenery, from Coeur d' Alene, Idaho, to beautiful Trinidad, Colorado. I've not lived year-round in Colorado since September 1977, when I left Colorado Springs for Los Angeles.
I've been following the Colorado Creative Industries for about two years, and have been extremely impressed by the State's Creative Districts - most specifically the Corazon de Trinidad.
So, while I decided last year to relocate, the whole process was sped up by the events which have buffeted lives world-wide in the past four months. 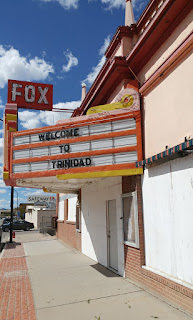 Trinidad is in the southeast corner of the state, about equidistant from Denver and Albuquerque. It has a rich history, a magnificent downtown Historic District, and is home to the newest (42nd) Colorado State Park - Fisher's Peak.

Amtrak runs the Southwest Chief from Union Station in LA to Chicago, and Trinidad has long been a stop along the route. It is also located along the I-25 corridor, and abuts the beautiful San Luis Valley, which houses the Great Sand Dunes National Monument.

So, it's worth either a drive or train ride to check it out...


Some thoughts about re-titling this blog come to mind:
"In Search of Stanley Biber", or
"Playing the Flute in Drop City", or
"A Fox in Trinidad"