September 11, 2010
It is the end of a several days that have had frustrating elements - nothing tragic, just the feeling that my wheels are spinning.... 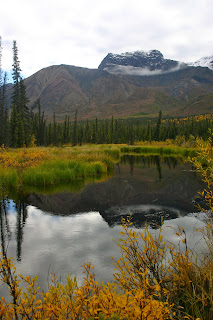 Our last few days involved driving to Seward - and spending a couple of days there - then over to Valdez, and up through the Wrangell-St. Elias Park. During our couple of days there, I picked up and read Two Sisters, by Aileen and Sammi Gallager, the "Coming of Age and Living Dangerously in the Wild Copper River Valley" (2004). Aileen, at the age of 21, moved to Alaska and lived with (eventually married) a man almost twice her age - in 1927. Her younger sister Sammi came up for a year at two different times - she was six years younger than Aileen. All this took place in the Wrangell area. One of the many things that was striking about their accounts is how little the place has changed in 80 years.....(Aileen died several years ago at 89, Sammi was 97 as of a couple of years ago.)

Marshall and I then began a trek back across Canada, taking the Tok cut-off (at the northwest edge of Wrangell), going through Tok and then Port Alcan towards Whitehorse.   We spent a night in Teslin (back in an endless landscape of trees, all the while in drizzling rain),   and down south towards Stewart and Hyder, just north of Prince Rupert.

Four images of Teslin - an overview (above)
and three at our campground. 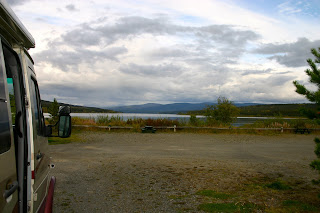 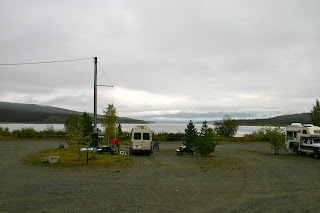 While driving these hundreds of miles, we saw virtually no wildlife (while it had been generally abundant in the middle of Alaska). Two moose and three bear - two of the latter were dead, a cub hit by a car and hunters dragging a kill to the side of the highway. It was so meloncholy, after all the wonderful sights and experiences of the previous two weeks.


And, I've spent several frustrating days trying to post images. I've got 'em, but just can get them uploaded. Ah, we get so accustomed to using the internet and computers as a crutch.

So, I'll get images posted when the cosmos smiles on the circumstances. Right now, we're in Vanderloof, B.C., the geographical center of British Columbia. 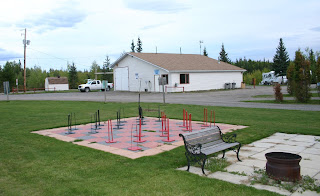 The checkers board at Dave's RV Park