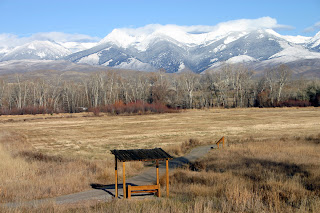 The Idaho that I know and experience today is much like the Colorado which I knew in the late 60s and throughout the 70s. I've had reason to drive through Utah and Colorado in the last few years and, while many areas are pristine, there are other sections that have been overcome with sprawl. There seem to have been fewer "changes" in Montana, Wyoming and northern Utah, although all of the major (the definition varies by state) metropolitan areas have gone through transformations. But that is inevitable. It is just startling for us to see the houses, streets, chain stores and activity in places that we remember as landscape, either bare hills, ranches or farms.

Something draws me to the West (I knew there was something special about it the first time Russ Bissell took me and five of my classmates to Colorado for a three-week camping/hiking trip in 1966), and I flirted with it - sometimes seriously - off and on for the next 17 years. Then I unexpectedly got sidetracked, and ended up in LA, for almost three decades (there was a six year overlap between Colorado and LA, spending time in each state for different months in any given year).

Today I breathe clean air, wake up and see the mountains through the sliding door in our bedroom (except in December or January when the snow is piling up!). Walk or bike to many of the things I need to do outside of the house (during the late spring, summer and fall!). We live four blocks from the Big Wood River and can walk down there and take our golden retriever to swim in it during the summer.

I like driving through the landscape, sometimes for hours, watching it slowly change - slow, because the scale is so immense. Just outside of the Wood River Valley, where Deb and I live, we can go for a hike, picnic and soak in the views, hike in various canyons and be alone for two or three hours, visit one of the lakes on the other side of Galena Pass - and canoe! - or, these days, bike through most parts of it.

Alaska always beckoned me as place, a frontier, that had all these qualities; however, I always knew the geography was immense, and I imagined all those qualities that attract me to the west would be equally exaggerated.

This particular image was taken in Salmon last year. For me, it characterizes much of the grandeur of the west (the lower forty-eight) - cultivated fields respectively tended against the backdrop of what (I hope) can never be touched.